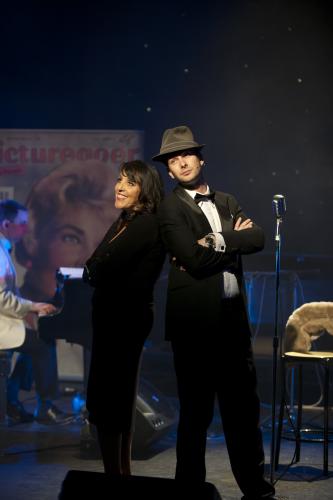 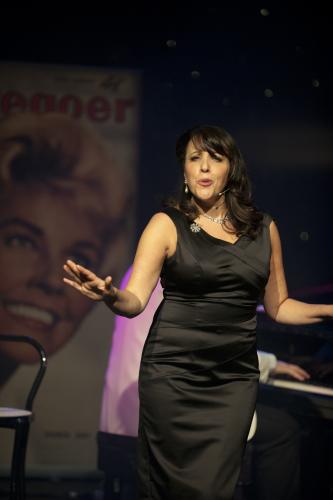 Quotes About The Show

Claudia Morris sings with flair and beauty, innocence and integrity, and with her colleagues catches appetisingly the hip, louche nature of the 1950s Sinatra-era. When the three sing together, it’s even more magical still.

Claudia adds a sophisticated jazz take on many of Doris Day's hits with a voice that is pitch-perfect, is beautifully interpretive with flawless diction and has an unerring sense of rhythm.

Reviews Of The Show

Secret Love was performed at the Plowright Theatre, Scunthorpe and continues to tour until 28 November.

Doris Day was a phenomenon, and became a legend almost before her time. Born Doris Mary Ann Kappelhoff in Cincinnati in 1924, she was a teen star – by 13 a potential dancer – groomed for the stage and, more importantly, almost 40 films, in an era when movie stardom really hit the heights. Somewhere between Forces’ Sweetheart, Greta Garbo and a big band answer to her heroine Ella Fitzgerald, by 15 she was on the way and soon hit the top.

Beautifully written by Phil Willmott who also directs, the musical play Secret Love includes a specially recorded message from the almost 90-year-old Day herself (the name came from her singing the post-war hit ‘Day after Day’). The show itself turns out to be a true celebration of the singer and actress which thankfully does not try to ape her vocal mannerisms or spectacular blonde hairstyles.

The music – a wonderful survey of Day’s great hits – is characterfully backed by a traditional onstage trio – keyboard, bass, drums – led by musical director Malcolm Edmonstone. The actor/singers are a trio too, beginning with Claudia Morris as the feisty, ambitious yet blessedly innocent young singer, eventually going through four marriages and moments of financial collapse (due to one imprudent husband, also her agent), and caring desperately post-war for her son Terry.

Actor Andrew Glen plays several agreeable bit parts and proves himself a truly fine singer, a wonderful tenor sound that enhances the production. The acting from fellow-Scot David Haydn, who portrays (amongst others) the husbands, is a joy, engaging the audience from start to finish. Every generous smile and well-meaning smirk, shy shuffle or quiver of the shoulders, speaks volumes.

The way Willmott and Morris have woven the songs into the story of Day’s life – a saga of rich variety and intense, lovable humanity and ordinariness – is frankly miraculous. I can think of only one similar show I have seen recently which had a comparable impact – albeit more ironically – and that was Maureen Lipman in Glorious, where she charted the career of the American singer Florence Foster Jenkins.

Lipman performed the Queen of the Night’s aria from Mozart’s The Magic Flute and sang it perfectly out of tune (that was Jenkins’ speciality). Morris, by contrast, sings with flair and beauty, innocence and integrity, and with her colleagues catches appetisingly the hip, louche nature of the 1950s Sinatra-era. When the three sing together, it’s even more magical still.

You have to possess a rare musical talent to attempt a musical based on the life of Doris Day.

Yet Claudia Morris not only succeeds, but does so brilliantly. In the company of pianist and musical director Malcolm Edmonstone and guitarist Matt Backer, Claudia adds a sophisticated jazz take on many of Doris Day's hits with a voice that is pitch-perfect, is beautifully interpretive with flawless diction and has an unerring sense of rhythm.

The album "Secret Love" is now available, and as the lyrics to the title track say "and my Secret Love's no secret any more".

If there is any justice, it should sell by the barrow-load.

Films include: 'Aedin' in The Crown And The Dragon, 'Cavill' in The Trap, 'Ryan' in Kinolife and 'Paul' in Kundalini.

Phil Willmott is a milti-award winning director, artistic director, playwright, composer, librettist, teacher, dramaturg, arts journalist...and occasional actor. He has worked in theatres across the world on everything from classical drama, musicals and family shows to cabaret and cutting edge new writing including notable productions at Liverpool Everyman and Playhouse, Sheffield Crucible, The National Theatre Studio, Nottingham Playhouse, in the West End and for ten years as an associate artist at B.A.C. He is artistic director of his own multi award winning theatre company The Steam Industry (incorporating The Finborough Theatre and The Scoop out-door amphitheatre on the South Bank) and also works as a broadcaster, arts journalist, playwright, lyricist and composer.

He's been a recipient of a Peter Brook award for innovation and entertaining theatre for his classical and family shows, a T.M.A. award for outstanding musical production, whatsonstage award nominations for best regional and Off West End productions, a Brooks Atkinson/Royal Court award in New York for playwriting and 4 Spirit Of Broadway awards.

Malcolm Edmonstone is a jazz pianist and arranger. He studies at the Guildhall School of Music and Drama. where he became a professor in 2005. Having gained a Bachelors and a Masters degree, Malcolm continues to forge a career as a modern musician, working as a pianist, educator, arranger and musical director in many high profile situations.

He has worked with some of the most original musicians in th UK, including Mark Lockheart, Stan Sulzmann, Iain Dixon, and Jacqui Dankworth, accompanying her on her albums Detour Ahead and Back To You.

Malcolm has also worked with Laurie Holloway on the first three series of the BBC1 show Strictly Come Dancing where he played piano and arranged a significant proportion of the music. As a session musician Malcolm's extensive work ranges from recording for BBC Radio 3 with conductor Lorin Maazel to playing on live television with Tony Bennett. He has recorded extensively as a sideman in the jazz and commercial worlds.

Andrew Bain is one of the leading performers and educators in the UK. A graduate of the Guildhall School of Music and Drama and winner of the BBC Big Band Drummer 2001, he has performed with Wynton Marsalis, Kenny Wheeler, Randy Brecker, Dave Liebman, Bob Mintzer, John Taylor, Iain Dixon, Mike Walker, Jason Rebello, Mike Janisch, Phil Robson, Jim Hart, Mark Lockheart, Chris Batchelor, Mark Hodgson, Jean Toussaint, Houston Pearson, John Parricelli, Steve Watts, Stan Sulzman, and was a member of Jacqui Dankworth's band between 2007-8, recording with the late Sir John Dankworth in in 2008. He has performed at many prestigious venues in the UK, Europe and the US including the BBS Proms and the Montreux Jazz Festival.

Receiving his Masters from the Manhattan School of Music, he was resident in New York from 2001-07. During this time he performed extensively with Thelonious Monk Competition winner Jon Irabagon and singer Jason Liebman. He has performed at many of New York's famous clubs including Sin-E, CBGBs, Tonic and the Mercury Lounge, and recorded at Sony Studios.

Jules Jackson has been working professionally in London as a bass player and drummer since graduating from the Guildhall in 2002,

In recent years he has worked regularly with Jamie Cullum, Jacqui Dankworth, Sir John Dankworth/Dame Cleo Lane, and American drumming legend Peter Erskine. Additionally he has performed or recorded with a vast array of British jazz musicians, including two albums with the acclaimed trombonist Mike Hext.

Jules also directs various bands for the corporate and private entertainment market, teaches jazz at Middlesex University and Christ's Hospital School, and operates a home recording studio which is kept busy by many of London's most reputable jazz musicians and ensembles. In 2001 this studio was used for the recording of Jules' debut album Groove Therapy.

Let There Be Love